Children of the ghetto

Salomon, Mordechaj, Jenta, Miriam, Melech and Perla are some of the many names of children born in Tomaszów Mazowiecki during the existence of the ghetto. These children were usually born at home with the help of midwives, sometimes in a Jewish hospital located in the ghetto area. Before the Jewish hospital was established, which was on 13 July 1941, some babies were born in the municipal hospital on Antoniego Street. Some Jewish women giving birth went there at the end of 1941, when the ghetto hospital was already functioning.

In the ‘Children of the Ghetto’ project, we are recovering the names of the youngest Jewish children. We are trying to find out as much as possible about the newborns, their families and places of birth. We assume that the strict, closed ghetto, located in the centre of Tomaszów, existed between 1941 and 1942. The process of liquidation of the three sectional Jewish district and resettlement of Jews to its central part began at the end of 1940. ‘Small ghetto’, i.e. a forced labour camp for Jews, was separated on 2 November 1942. By this time, as of January 1, 1941, 147 Jewish children had been born.

The last child born in the Tomaszów ghetto was a girl named Basia, daughter of Minka Landsberg and Pinkus Klejnman. Basia was born on 2 October 1942 at 11 Radomerstrasse [now Bohaterów Getta, before the war Bóżniczna]. 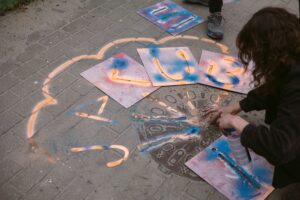 As part of the project, a bilingual Polish-English publication devoted to children and their families is being developed. The book will be the fruit of the work of a volunteer research group, which was set up in May 2021. At that time, Agnieszka Kuba, Bernadetta Czapska, Sławomir Fałek and Rafał Piekarski were compiling a database of newborns under the supervision of Justyna Biernat, PhD. On the basis of source materials, the researchers managed to create cards of all children born in the Tomaszów ghetto. On 1 June 2021, a happening took place under the artistic supervision of Aleksandra Ignasiak, PhD. Students of the Academy of Fine Arts in Łódź were involved in the preparation of the happening. The academy assumed honorary patronage of the action.

The happening was organised by the Spaces of Memory Foundation in cooperation with the Academy of Fine Arts in Łódź [Pracownia Działań Malarskich w Przestrzeń Publicznej] and the Municipal Public Library in Tomaszów Mazowiecki. It took place with the consent of the Management Board of Roads and City Maintenance, for which the organisers would like to express their sincere thanks.

During the happening, the names of all newborns were placed on the pavements of the former ghetto.

The ‘Children of the Ghetto’ publication project has been made possible thanks to a grant from the Jewish Historical Institute Association.